First off, Happy New Year! We made it past an arbitrary point in time. Now we get to spend the next couple of months awkwardly changing our sevens to eights.

If you’re wondering what I got up to over Christmas be sure to check out my review of Christmas-opoly – which was an elaborate ruse! There was no review to be found, only a post about how my Christmas panned out. It was pretty great actually, thanks for asking.

In terms of site news, the newsletter was a bust. It’s something I’d like to do in the future, but right at the moment I want to focus on producing more quality content. Also, there’s a financial cost that I’m not ready to commit to. Never fear though as you may have noticed I’ve now got a Facebook, and Twitter page up and running. Logging in and following either is a great way to find someone to chat about games with, and show your support.

In other news, you’ll notice that we now have some decent categories along the side menu so you can find your way around the site. Hurray for progress!

Lastly, this post is kicking off Critical Hit January. The next four games I review will all be Critical Hits. So hang onto your hats, because it’s going to be great!

Looking back at the games I’ve reviewed in December, in case you missed them:

This is probably why you’re here, and if I’m honest it’d be why I’m here too. I love board game haul videos, and hope that my haul posts are equally entertaining. Here we go: 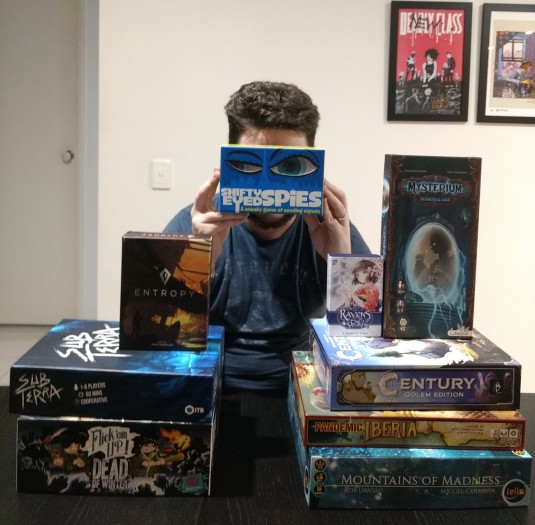 The Ravens of Thri Sahashri: Back when I reviewed Hanabi Lorna Dune suggested to check this game out – and I did. It’s received positive feedback on BGG, and it was only 12 dollarydoos. Have yet to play it.

Shifty Eyed Spies: This was recommended a few times by various sources, so I managed to pick it up. Having played it once, I’m not sure how I feel about this board game. It’s probably the most awkward I’ve been around my friends in a long time. Plus it turns out I’m terrible at subtle winking.

Sub Terra: I mentioned this in our last news section. It arrived soon after, I’ve played it a few times since; it’s really good game, if a little light. I’m looking forward to reviewing it.

Century: Spice Road – Golem Edition: Picked this one up, as I was in the mood for getting some limited edition stuff. I’ve had one go so far, the theme is great, and artwork fantastic. However, I’m not 100% sold on the mechanics, in our game I picked up like five cards, and at that point I had everything I needed to finish out the game. I’m currently thinking I got lucky, so I’m looking forward to playing again.

Mountains of Madness: I had Mountains of Madness preordered last time I spoke about it, but it arrived this month. I’ve played it once, and I’m lukewarm on it, it’s a party game that looks and feels like it should be a strategy game. Could be a great one to play over a few beers.

Get Adler!: Not pictured above. I forgot! Sorry! This was provided by Caper Games and you can read my review of it, here.

NMBR 9 – This game, plus the next ones, were all part of large preorder I placed back when I had some expendable income. This is an abstract puzzle where the numbers from zero to nine are in tetris-like shapes, and you have to join them together to make the most points. Haven’t played it yet, but seems right up my alley.

Mysterium: Secrets & Lies Expansion: Adds more cards to Mysterium, and changes the last guess needed from weapons to motives. All of the new components make the game a lot grimmer, which I like – but realise some won’t. I also liked the added challenge of the motive cards.

Flick ‘Em Up: Dead of Winter: Back in August when I preordered all of this, I was going through a dexterity game phase, and I was tossing up between regular Flick Em Up and this. Eventually decided on this because I like the Dead of Winter IP. Haven’t played yet, but have put on a lot of stickers.

Entropy: This is a 2-6 player role selection game by some Australian fellows. I always like supporting the locals unless the price point is too high. In this case it wasn’t. Haven’t played it yet, but one person on reddit said they liked it, so it must be good. Right?

Pandemic: Iberia: Lastly, this was given to me as a Christmas gift. I’ve one play under my belt, but I can see myself playing this A LOT more. Really enjoyed it, it was sufficiently different enough from Pandemic to warrant the purchase, and out of all the games I got in December it’s this one I’m craving.

That’s all for this week. Have a great weekend, and see you on Tuesday for our first Critical Hit of January. If you’re feeling bold you should take a guess at what you think it will it be. Hint: There will be monsters.

Invite your friends to the table: